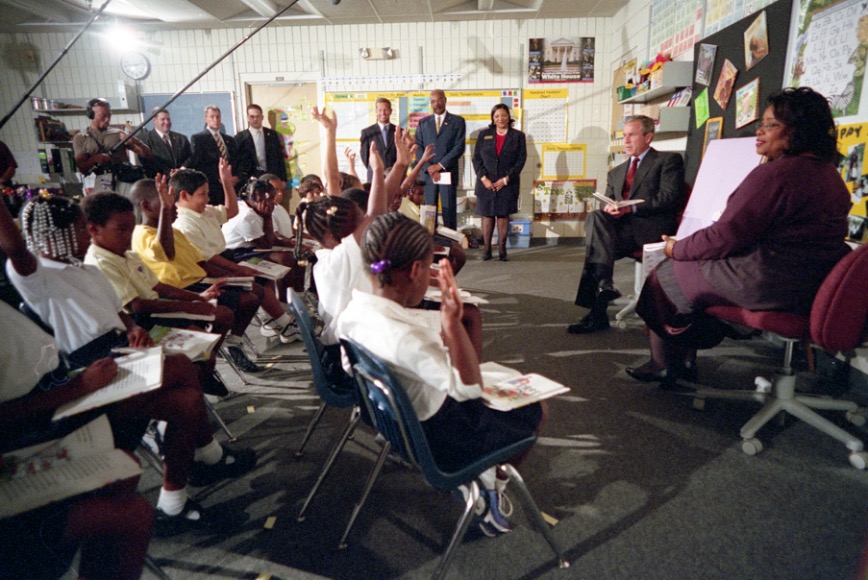 Toronto – August 21, 2020) – Saloon Media, a Blue Ant Studios company and producer of award-winning documentary, 9/11 Kids, is honored to announce on behalf of Emma E. Booker School in Sarasota, Florida, a new scholarship that will benefit the continuing education of a Booker High School graduate. The announcement coincides with the start of the 2020 American Black Film Festival (ABFF) and its selection of 9/11 Kids (1×78’; 4K and HD), which reveals the untold story of the second-graders who were reading with Former President George W. Bush at Emma E. Booker Elementary School when the World Trade Center was attacked. Now in their twenties, they offer a fascinating window into post-9/11 America as they detail personal stories of inequality, discrimination and economic struggle over the last 20 years. Watch the 9/11 Kids trailer HERE.

“Helping establish a scholarship to give back to The Booker schools in Sarasota, which have gone over and above for their students, is a dream come true for the entire 9/11 Kids production team and continues the documentary’s message of optimism and hope for the future,” says Elizabeth St. Philip, Director, 9/11 Kids. “It’s incredibly rewarding for 9/11 Kids to be included in the ABFF, alongside a high calibre of films showcasing the work of truly inspiring Black filmmakers.”

The scholarship will honor the late Principal Gwendolyn Tose’-Rigell, whose tireless work and dedication helped attract President Bush to the school in 2001 to celebrate the school’s achievements in literacy and talk about the national education initiative, No Child Left Behind. That day, which was intended to be about setting up a bright future for the kids, was ultimately overshadowed by the 9/11 attacks. Now, almost 20 years after that historic tragedy, this new scholarship will be awarded annually to a senior at Booker High School who has attended the three Booker schools, Emma E. Booker Elementary, Booker Middle School and Booker High School.

“This scholarship is such a wonderful gesture and will help a life-long Booker student continue their education beyond the walls of our schools,” says Mrs. Sandra Kay Daniels, a long-time teacher at Emma E. Booker Elementary School who was the classroom teacher during President Bush’s visit on September 11, 2001 and is interviewed in 9/11 Kids.
Saloon Media is contributing funds to seed the scholarship along with Elizabeth St. Philip who is donating the prize awarded to her for winning the Rogers Audience Award at the Hot Docs International Film Festival, where 9/11 Kids premiered earlier this year. Take Stock in Children of Sarasota County, a Florida-based non-profit organization dedicated to helping students in need achieve post-secondary education, will be the scholarship partner. The Gwendolyn ‘Tose-Rigell Scholarship committee will consist of Kay Daniels, Edwina Oliver, Principal at Booker Elementary and Dr. LaShawn Frost, Principal at Booker Middle School. Take Stock in Children has created a website for the general public to contribute to the scholarship, at takestocksarasota.org/donate. Donors contribute by writing “9/11 Kids” in the custom message section.

9/11 Kids begins by taking audiences back to the morning of September 11th, in which President George W. Bush was listening to a story as the classroom of second-graders at Emma E. Booker Elementary School in Sarasota, Florida were reading when a plane hit the second tower of the World Trade Center. For the 16 kids and their teacher, Sandra K. Daniels, this iconic moment in American history is forever etched in their minds. Now, almost 20 years later, the film reveals what has become of this classroom of gifted, predominantly African American children. 9/11 Kids catches up with many of those present on that fateful day. Many have gone on to thrive, but for some, life has been challenging and affected by inequality and economic struggle. The film reflects on the theme of race in America as well as what the American Dream means today.

The ABFF, which features the best of independent Black cinema typically attracts 7,000 to 10,000 attendees to Miami Beach, but this year will open its virtual doors to a global audience, offering most of its programming free of charge from August 21 to 30. As a 2020 Official Documentary Features selection, 9/11 Kids will be eligible for a nomination to compete for the Jury Award for Best Documentary, presented by Amazon Studios. This year, the ABFF’s program features a record number of female directors with more than half of the submissions from first-time filmmakers. The festival was conceived in 1997 as a vehicle to strengthen the Black entertainment community and provide a platform for emerging artists and has become one of the leading film festivals in the world and a place of inspiration and community for many.

Saloon Media, a Blue Ant Studios company, is a creative hub for compelling new television and digital productions. The founding partners have a wealth of experience in broadcasting and factual production, and a track record for delivering successful and award-winning programs to international clients. Saloon’s productions have broadcast on History, National Geographic, Smithsonian, Investigation Discovery, CMT, SBS, ZDF, Yesterday, Four, More4, and Netflix. Saloon is a specialist in international co-production, working with like-minded production partners around the world to produce top quality returning series and high-impact specials. Saloon Media is based in Toronto. Saloonmedia.com

Blue Ant Studios is a leading international studio and production business, based in Los Angeles with offices in New York. Blue Ant Studios includes production companies in the US, Canada, Australia, New Zealand and Singapore, which produce content in multiple genres including Scripted, Documentary, Kids, Adult Animation, Factual Entertainment and Natural History. Current series and documentaries include Love on the Spectrum (Netflix), Canada’s Drag Race (Crave for Bell Media), The Healing Powers of Dude (Netflix), Doomlands (Quibi), Neopets, produced in partnership with JumpStart Games Inc., and Hotel Paranormal (Travel Channel and T+E).  Blue Ant Studios works with all major international streaming, cable and broadcasting companies as well as regional players in the markets it operates in. Blue Ant Studios is a subsidiary of Blue Ant Media.

No comments to show.

Take Stock in Children of Sarasota is a non-profit organization that provides a unique opportunity for low-income and at-risk students college scholarships, caring volunteer mentors and hope for a better life. Our comprehensive services start in middle school, continue through high school and include their transition into college.